Today is the unofficial Darwin Day and the official birthday of Mr. Charles Robert Darwin.  While most folks probably know the name Darwin, fewer likely fully understand his contribution to modern Biology....we'll actually Evolution by means of Natural Selection IS the central pillar of modern Biology, so yeah, it's kind of important.  With this is mind, Rep. Rush Holt (D-NJ) has put forth a resolution in the United States House of Representatives to make today, February 12th, Darwin Day.  I can think of no better idea. If you would like to find out more you can get details here (and if you think this is important contact your representative or senator). 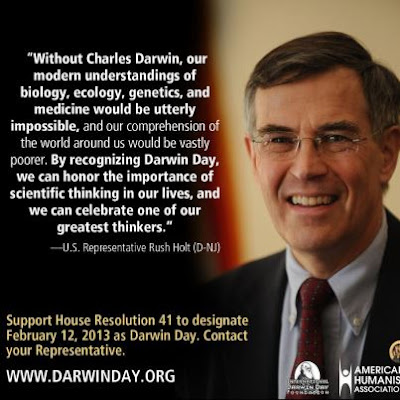 A sea monster no more!

Of utter fascination to me is that we know so little about the world around us, especially the living world.  The old adage about knowing more about the surface of the Moon than what lies in our oceans (attributed to Paul Snelgrove) is true (although one could argue that the Moon surface is a lot less complex and essentially 2 dimensional compared to the Earth's oceans). Stories from ancient times tell of various sea monsters that can consume ships and eat their sailors. For a very long time myths have abounded about the giant Kraken, otherwise thought to be a giant squid (although Hollywood would have us think this monster was either an angry multi-armed ape or a giant toothy crab). Such giants certainly exist, given how many of them are found washed up on beaches or are caught in the nets of fishing vessels, although until very recently actual video images of this animal did not exist.


The beast in question is known as the Giant squid, Architeuthis dux, and has been known to science for over 150 years.  During the days of whaling it was not uncommon to find the bodies of these animals in the bellies of sperm whales or to find the scares from their clawed tentacles on the heads of the whales. Great battles between whales and squid have therefore been hypothesized to take place many thousands of feet down (below).

Although this animal can reach up to 13 m (about 43 feet), NO VIDEO OF THIS ANIMAL HAS EVER BEEN TAKEN! The best we had were some photographic images of the animal taken by a Japanese researcher working with a modified deep water camera that was able to capture some images of an squid that was lured to a baited line (right). Researchers had to settle for these somewhat grainy photos to work out details of their behavior and ecology.  That is until this summer when the same Japanese researcher was able to capture the first video image of a "small" specimen in the wild.  The squid that was captured on film is a mere 10 feet or so (about 1/3 the size of the largest animals found washed ashore).  The video, which will be part of a  Discovery channel special later this month, shows the squid swimming and interacting with a baited line about 2,000 feet down.  The submersible was outfitted with special lights that allowed it to see the squid but would not scare away the animal.  The video below shows a brief portion of the encounter (and earlier video showed more content but has been blocked by Discovery):

Note the large eye in the video. Note only are the eyes of these animals very similar in structure to a mammalian eye, they are also the largest eyes of any living animal (about 1 ft in diameter on the largest specimens).  This video will surely fill in some details of the biology of this elusive giant, but so many more questions remain.  Hopefully future expeditions will capture more biology so we may better understand and thus protect this living sea monster!

Don
I am a community ecologist specializing in aquatic habitats with an emphasis on mosquitoes. I also maintain interests in various other scientific disciplines, including astronomy, cosmology, archaeology, paleontology, and other natural sciences. I am an Assistant professor of Biology at the University of Southern Mississippi, in Hattiesburg, MS.